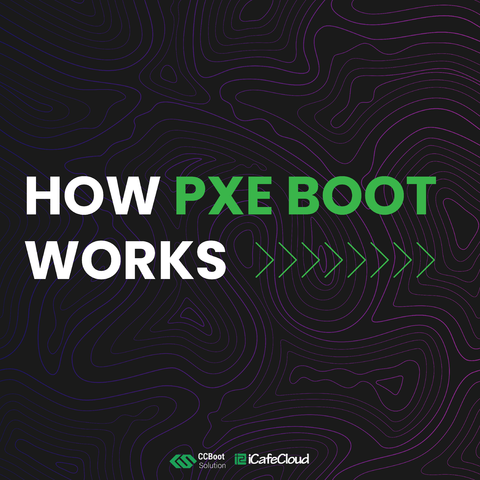 Wondering How the Magic Of PXE Boot Works ? Here’s as layman as we can get about explaining it, Ready, Player One? Go, Go, Go!

First, we send a request from our client to the server, this is a DHCP broadcast which is sent from the client side that let’s the server know about the device which is looking to boot from the server. This message as you can guess is conveyed over a network, preferably operating on Gigabit (1 GBPS) Speeds

Next, as any beautifully engineered communication would have, is the response. The server takes the broadcast signal from the client and replies with a suggested IP that the client PC can use as it’s Static IP. This is essentially the address this specific client PC has on your diskless network. Although this could look a little tedious to start with, the basic idea is to assign a number of your choice to the selected client. In general, an IP would look something like 192.168.1.101.

Now, it’s time to Authenticate a.k.a. Make it official. The client now assumes the IP it was allotted in the last step and now acknowledges it’s being as client 192.168.1.101, let’s call it PC101 for now.

Here, PC101 knows for sure that on the network this is it’s place to be and it will always boot with the same IP address as long as no changes are made to the setup or the server manually.

Now, comes the writeback, the crux of this whole ordeal!

As soon as the basic Authentication is complete, the network disks start moving their gears (Or magnets in this case) to make sure the client PC is getting the required data at the right time. A combination of drives work in harmony here to provide the client with a stable boot image, data to read from which is stored primarily on the server and a powerful writeback disk that enables data to travel form the client to the server and vice versa. All of this ofcourse running all over the Gigabit network environment that was setup for running the setup.

And we have it, a diskless client running off a server that stores all of the data the client will need at any given time to function! And in theory, you can boot n number of devices from a single server as long as the server is strong enough to support as many diskless boot devices!

One Random Morning at the Store

Me : Hey, Guess What? All the PCs in my Network work with no disks at all.

Want to win a 100$ from your friends FOR FREE? Logon to https://discord.gg/xgS9DrE to try the software at ZERO COST! Or DM Us today!